The Branché project, composed of a team of eight artist-acrobats, is a collaboration between Cirque Barcode and Acting for Climate-Montréal that proposes a committed and engaging work. Performed outdoors and always adapting to the venue, the project is seasonal and constantly evolving. 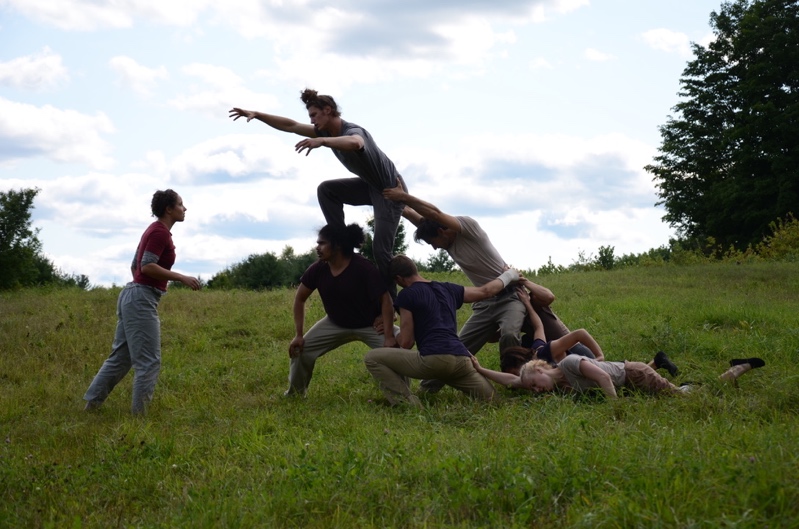 After a year and a half of exploration, a first creation was presented in the summer of 2021. Their creative residency at D'Arts et de rêves aimed to refine the show, developing the acrobatic and poetic language, as well as their sensitivity to reflecting nature through body movement. The artists wanted to make use of the Cultural Park and to draw inspiration from the surrounding nature of Sutton.

The environment is at the heart of this project, which evokes the subject of the climate crisis with simplicity and optimism while celebrating the strength of community.

"More than a show, Branché is a work ethic, a creative ethic, a way of existing together that is shared and developed by each of the participating artists... It is a show that addresses the climate crisis and proposes an innovative way of doing a circus show with a minimum of impact on the ecology," say the artists.

During their residency in June 2022, we were treated to the show Branché in the Parc culturel D'Arts et de rêves, follow this link to read the report of the event.

Laurence Leduc-Primeau was awarded the 2022 D'Arts et de rêves scholarship for Literature. This young and emerging writer has several publications to her name, Lettre à Benjamin (La Peuplade) in 2021 and Zoologies (La Peuplade) in 2018, to name but two. Over the course of her three week residency in August, Laurence worked on her latest literary project, one she calls the « Fractals, chaos, intimate and divine project » combining narrative and poetry, which she began researching back in 2017. 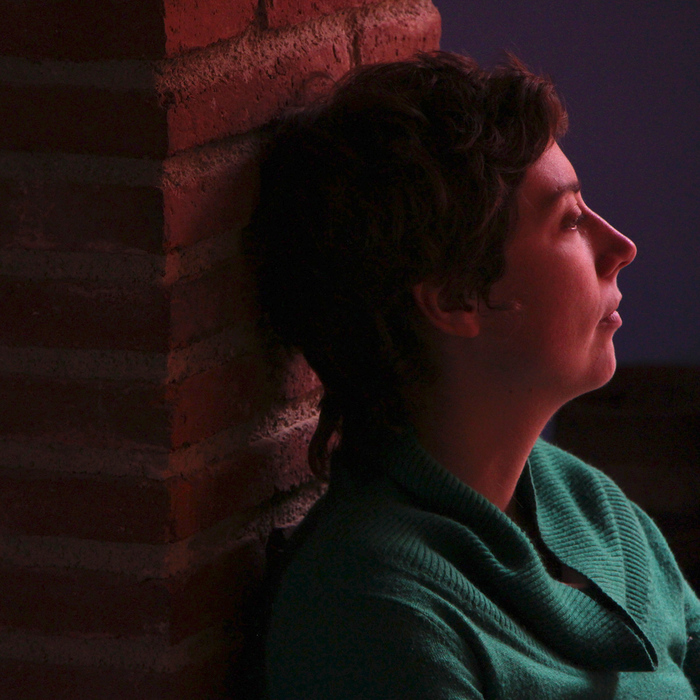 In January 2020, tragedy struck when Laurence’s partner took his own life. She stopped writing. Except for a long letter adressed to him, which would become Lettre à Benjamin.

After several months, almost a year without writing, she applied for a grant in order to explore the idea/reality of creation after death. « During this exercise , which is still ongoing, I am trying to figure out what trickles through, when all seems blocked. How to use creativity during this critical period in my life, in order to return to creating ? » she explains.

One of the concrete results of this exploratory exercise has been a revisiting of the once-shelved « fractals, chaos, intimacy and divine project » which may now be referred to as the « death, fractals, chaos, intimacy and divine project », she remarks. The public had an opportunity to learn more about the author and her intuitive approach to writing, during a talk at Studios DAR on August 18th, hosted by independant journalist, Ariane Émond.

The whole of Studio B was put to use by Sophie Perry during her three week stay at Studios DAR this summer. Indeed, upon entering the second story studiospace, it felt like visiting a futuristic cabinet of curiosities or laboratory where a smattering of electronic components, multi-coloured wires, various art supplies and materials covered the surfaces of several desks and tables. Not to mention the curious forms of her creations.

Indeed, the artist took advantage of her residency to continue work on a series of sculptures called État féral (Wild state). The interactive works, made of silicone and electronic components are organic in form and appearance and using AI technology, interact with the visitor, reacting to emotional responses. 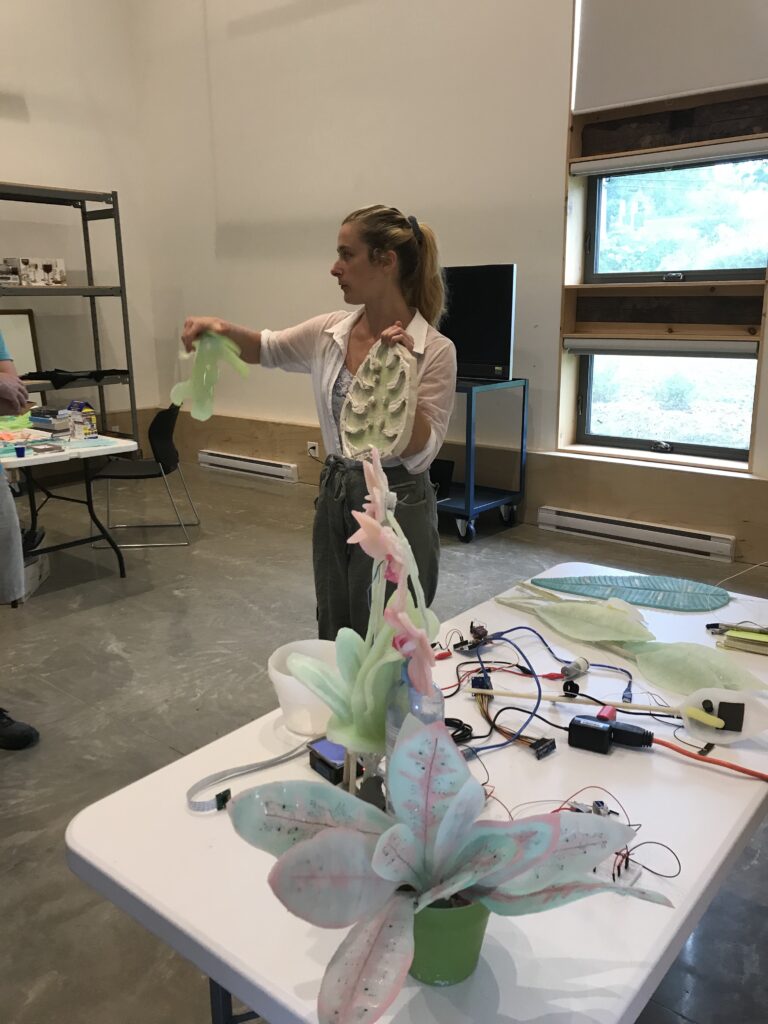 The plantlike forms of her works are recognizable and familiar, but imbued with an energy of something « other », almost alien or extra-planetary. The viewer approaches the works with great curiosity but also a certain hesitancy or caution, like a cat entering an unknown room. Thus, the artist addresses the tension that exists between humans and technology, a tension she eases with playfulness :

« I reappropriate representations of digital techniques in popular culture and stage them in a playful manner. Humour is an important lever, that allows me, not only to embrace and explore concepts which may be perturbing or revolting, but also to turn them inside out and transpose them into reflective spaces that feel benevolant », explains the artist. 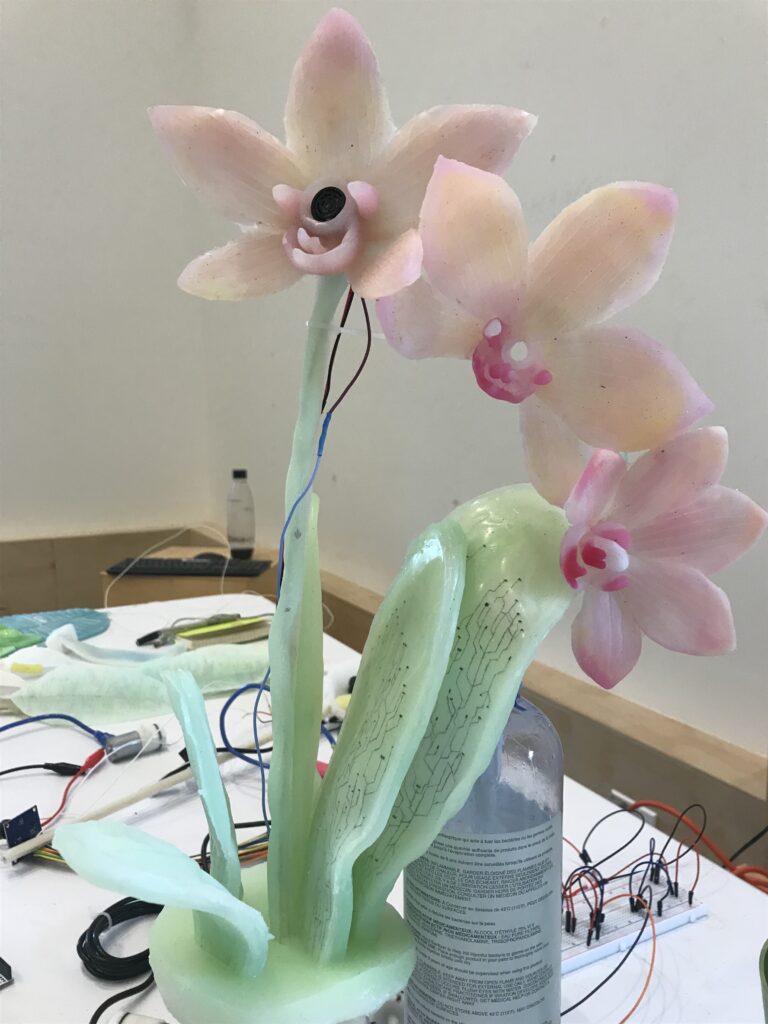 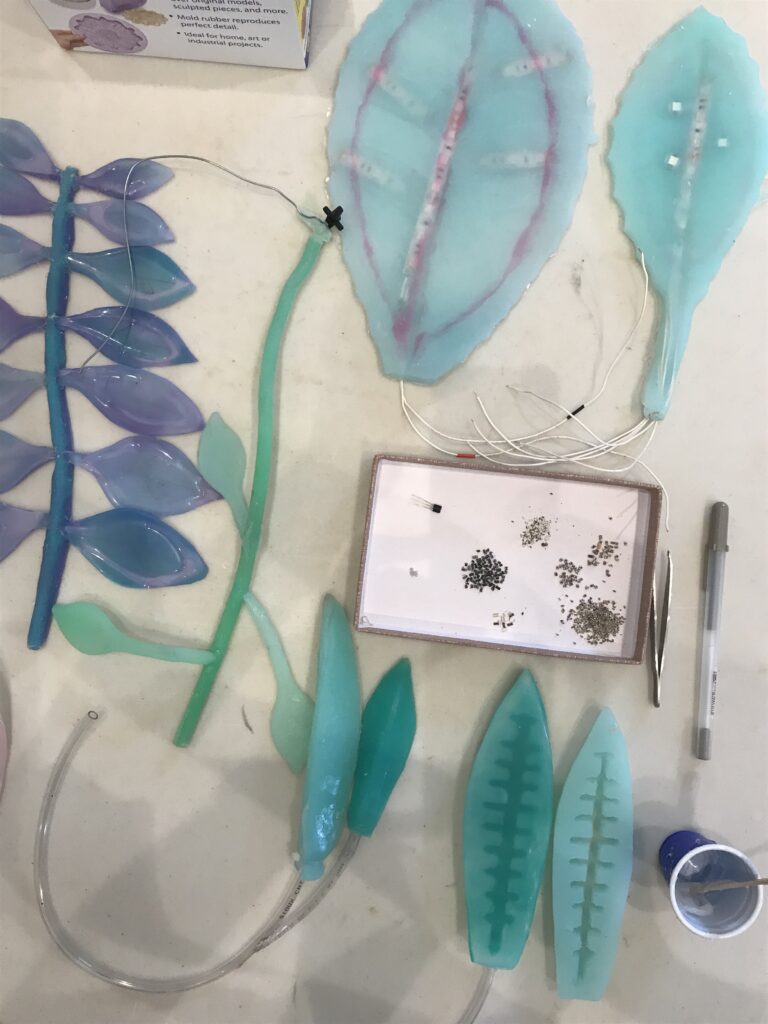 Her approach invites the viewer to question our relationship with life, living and non-living things, our thoughts on technology, biology and even psychology. A fascinating journey into a possible futuristic universe both mystifying and surprising.

By Natasha Evoy and André Gélinas