To Give for the Pleasure of Giving

Who is Robin de Leeuw?

Robin de Leeuw is a man who grew up in the Laurentians, lived in Montreal, and in the 80s chose to build a house in our region for the beauty of its landscapes, the mountains, the skiing, the warmth and kindness of its people, the quality of life... This stay in Sutton was to be transient but it seems that it has proven difficult, if not impossible, with the years to leave such a wonderful place!

Over the years, Robin has kindly, simply, and humbly invested time, ideas, passion, and energy in a variety of projects related in one form or another to the world of the arts, a world that he has been particularly fond of since a very early age.

Robin met Nicole Côté at the Galerie Farfelu, maybe ten years ago, and then followed with interest the opening of the Galerie Art Libre and the move from the Pine Street location to rue Principale. In love with wood, Robin is interested in everything that is done with this noble material, it is also how he got wind of the concept of D’Arts et de rêves: during a preparatory meeting for the Monumentum Symposium (see June 2017 newsletter), Nicole shared her dream with the people present. She had not yet found the property she was looking for, but she knew exactly what she was wanted: a lot in the city center that would allow both an artists' residence and a cultural park.

Robin was very impressed with the project, and Nicole's vision and generosity. However, no matter how hard he searched, he couldn’t see where this dream might come true. Then he learned that Nicole had acquired the Lusignan property at 57 Main Street North, but again Robin was perplexed. Even though he had spotted the lot on the street, he could not visualize what Nicole had described. Then, on a beautiful sunny day, Robin parked his car, crossed the little bridge and went walking in the field behind the barn, he climbed the mound, felt the breeze, admired the scenery, and was enraptured. He now understood that Nicole had found the perfect environment to fulfill her dream and he knew he would be there to give a helping hand!

When a call for volunteers was launched in 2015, Robin quickly signed up and has been present ever since at the many D’Arts et de rêves working bees..

Before the Lusignan house was demolished (voir see June 2017 newsletter), a chore was scheduled to recover anything worthwhile: a team took care of saving the perennials outside while a team, of which Robin was part, worked hard inside to recuperate cabinets, doors, moldings, electrical wires, pipes... All these materials were then stored in the barn awaiting a second life.

The land behind and in front of the barn was quite cluttered with trees and shrubs, so much so that you could barely see the barn from the street: Robin stripped trees and shrubs of their superfluous branches and felled others, which soon provided a whole new view of the barn.

Then, once the stripping/felling chore was completed, everything had to be shredded. A job that requires patience, attention, and a good pair of ear protectors to drown out the noise of the wood chipper.

Clearing the banks of the brook...

The stream flowing behind the barn is soothing and always amazes the artists residing at D’Arts et de rêves. It has been there forever, although it has not always been so visible: Robin helped to showcase this stream by cleaning its banks. This entailed more work with the chain saw and the wood chipper ...

Miryam St-Pierre (voir see December 2017 newsletter) had the pleasure of coordinating volunteers from June to December 2017. She says: "I loved working with Robin because he is creative and very thorough in every task he undertakes!” By visiting the cultural park, you will see the result of their work:

* According to Wikipedia: Land art is a contemporary art trend using the framework and materials of nature (wood, earth, stones, sand, water, rock, etc.). Most often, the works are outdoors, exposed to the elements, and subject to natural erosion; thus, some works have disappeared and only their photographic memory and/or videos remain.

Where else does Robin volunteer?

It's not uncommon to see Robin show up when volunteers are needed; his smile and soothing presence as well, as his constant and reliable help, are undeniably appreciated by everyone he meets:

Finding out a bit more about Robin... 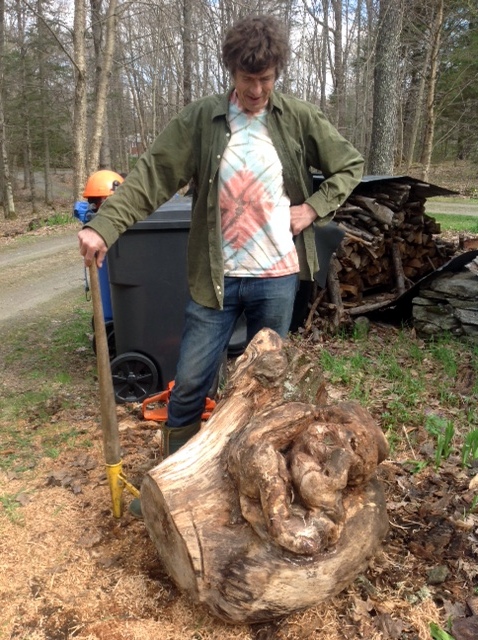 Robin studying a piece of wood,<br>his challenge: giving it a new form.

As a toddler, Robin was surrounded by artwork, his parents collected paintings, furniture, decorative objects... He has always loved beauty and had a soft spot for wood.

Did you know that in another life, Robin was a cabinetmaker and a Montreal businessman; his priorities were then to obtain perfect wood, without personality, without character, wood that he ordered after having drawn precise plans for cabinets, caissons, counters, floors... plans that were always closely followed. He worked on big projects of which he is proud of and was indeed quite successful. But that was another time...

ince Robin has discovered the pleasure of working with a wood lathe, the cabinetmaker that he was has become a craftsman who goes from discovery to discovery: he no longer looks for the perfect piece of wood, but rather searches for original, even unusual pieces that he would have refused when he ran his company. People in all the Quebec towns and villages now know that Robin is constantly searching for exotic wood, from trees grown in Quebec, sick trees, tree burls, or forked branches that he will take pleasure in taming to give them a new lease on life. The result is somewhat unpredictable. Wood is the master and often takes Robin where he hardly thought of going: it is by respecting the raw material, its strengths, its weaknesses, and the grain of the wood that such remarkable creations arise. (see photos-Robin, utility room and photos of more artistic pieces) 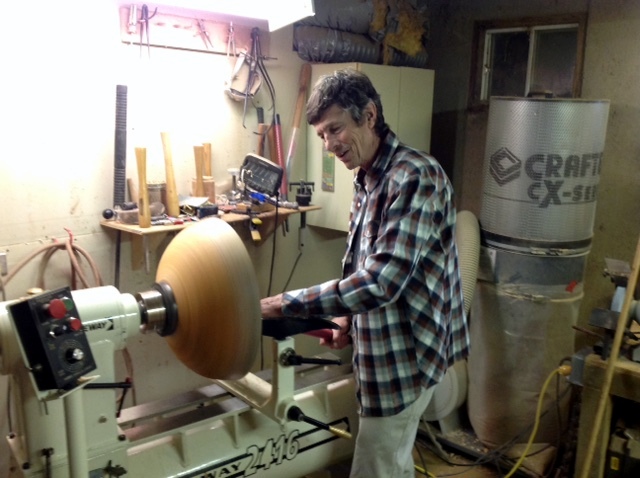 Robin has bought himself a new super performing wood lathe.<br>On this photo, he is working on a utility bowl. 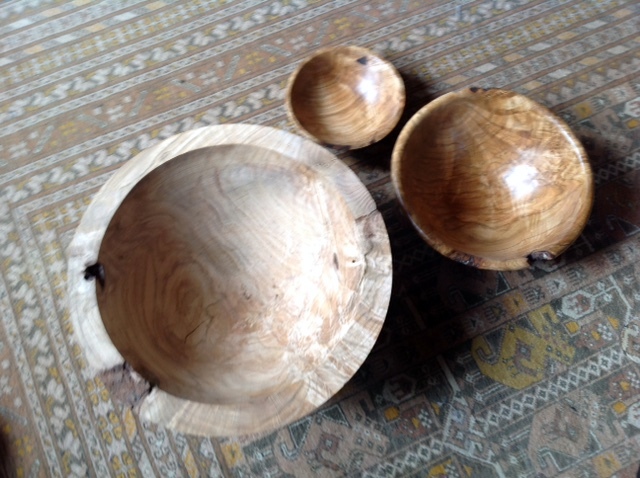 Three utilitarian bowls (in a series of four) made<br>from the same piece of wood.

Robin calls himself a craftsman but his three magnificent works are clearly the work of an artist.

Why give one’s time to D’Arts et de rêves?

Robin simply likes to give: when he can, he will gladly help out. Giving has even allowed him to receive in return: he has met some very interesting people, with varied life paths, committed people, people full of compassion, people who can be found in large numbers in Sutton...

What does Robin dream of for D'Arts et de rêves?

Robin has seen D’Arts et de rêves spread its wings and is thrilled by Nicole's project—and her perseverance and leadership. He is looking forward to the day when the planned amphitheater in the park will host events and attract people from everywhere, people curious to discover new talents while enjoying an enchanting site.

Robin warmly recommends that we take ownership of this space, that we walk, admire the landscape, explore the trails, and take pleasure in the works of art on display. This is a truly grand present that Nicole is offering to the people and city of Sutton, it is up to us to enjoy it!

Posted in Uncategorized
Scroll To Top