In the September newsletter, you learned of the many milestones that led, on June 18, 2016, to the official opening of the artists’ residence and cultural park located at 57, rue Principale Nord.

In this fifth chapter of The story of D’Arts et de rêves, the focus is on the landscaping of the property whose transformation makes it today a stunning location: please do explore the site and share with us what you think…

How to transform a huge tract of land that has been more or less abandoned for several years and turn it into a cultural park very pleasant to visit? This is certainly not something that can be done overnight. On the contrary, a lot of planning and work was needed to achieve this metamorphosis. But let’s go back in time… 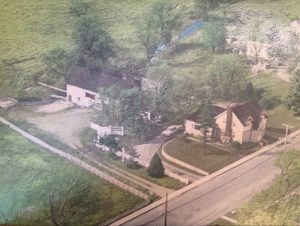 The farm house at the front of the property where the artists’ residence and the cultural park can now be found. You can see the barn and the stream behind; the house has since been demolished.

When Nicole Côté and Henri Lamoureux explored the land behind the barn at 57, rue Principale Nord, they were both mesmerized by the calm, the space, the vegetation, the view… Then Nicole started to visualize the paths, sculptures, trees, rest areas… When came Joanie Leroux-Côté’s turn to discover this environment, she immediately imagined a natural amphitheater where circus artists could one day perform.

How to make this happen?

A landscaping plan would definitely be needed so a committee was formed. Jacques Parenteau, landscape architect, agreed to chair the landscaping committee and to work closely with Nicole, as well as with Alain Champoux, Claire Léger, and Patricia Lefèvre, who, like Nicole, all believed in the potential of this space. 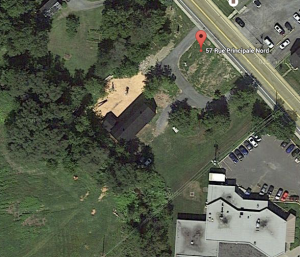 Aerial view of the front part of the property, photo taken after the demolition of the house. The sculptures of the Monumentum Symposium can be seen behind the barn.

Claire has since left the committee as has Patricia, the latter having been elected as a Sutton City Counsellor in the November election. To replace these two women, two men have recently joined the committee: François Fournier, our featured volunteer in the December 2016 newsletter, and Claude F. Gagnon, named D’Arts et de rêves 2016 volunteer of the year.

To design a landscaping plan, it was first necessary to find the rare gem: an ingenious, creative, enthusiastic, and visionary landscape architect, in short someone capable of producing a five-year master plan that would take into account the realities of a rather unusual project and alas, a limited budget. This is the challenge that the committee took on in 2015 by calling upon their networks for references and/or recommendations. 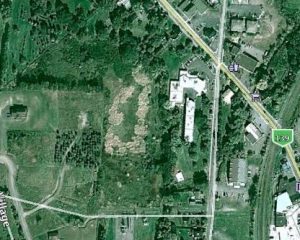 Land that Emmanuelle Tittley had to thoroughly explore to be able to develop the five-year landscaping plan. The Centre d’hébergement de Sutton can be seen in the centre, slightly to the right.

Fall 2015, the ideal partner is found: Emmanuelle Tittley, landscape architect. Right from the start, Emmanuelle is fascinated by the project of which she appreciates the community and artistic aspects; she also admires Nicole’s passion, enthusiasm, dedication, and the fact that she has chosen to give to the community access to a cultural park in the heart of the village. No need to tell you that Nicole and Emmanuelle quickly discovered they had many things in common, including a shared vision. In addition, Emmanuelle was familiar with the environment, since she has been living in the region for over ten years; she had already proven herself in the field, was ready to adapt to the financial reality of D’Arts et de rêves, and loved the idea of dreaming with the people of the landscaping committee. Furthermore, she understood that the project would probably evolve over time and that the plan would surely need adjustments.

It is Emmanuelle’s turn to get acquainted with the land: she walks it from east to west, north to south, diagonally, in circles… she surveys it in all directions, looking up the photos Nicole had shared with her and taking more pics to complete her analysis, evaluating the views, measuring the slopes, identifying animal species, inventorying the plants… 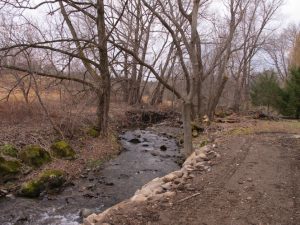 Then knowing what she was expected to transform, Emmanuelle researched the local planning regulations as well as the government rules and regulations that her plan would have to take into account. Some of the challenges: we wanted a grass reinforcement mesh parking lot in front of the barn… not only were there streams to which we could not get too close so as not to pollute them, but we would have to dig run-offs for the flow of water…

Winter of 2016, a first plan is submitted to the committee. Emmanuelle has thought it all out: the slopes, the woods, the paths, the streams, and plants that thrive when close to water. The people on the committee are delighted: the territory is well utilized. Venues have been specified to display sculptures, some to meditate, and others to rest.

To develop such a property raises basic questions, whose answer must reach consensus. For example, when to mow the field? That’s really not an innocuous question: the committee finally decided that mowing would be done twice a year, before spring nesting and in mid-September, after the last nesting—local fauna contributing to the richness of the environment.

Discussions take place, revisions are suggested, and adjustments made before the official five-year plan is submitted in March 2016.

Spring 2016, Nicole and Jacques assist Emmanuelle to finalize the plan. Surveyor meter in hand, carrying stakes and mass, the trio goes around the property and determines the locations, then notes the exact measurements, of the components of the five-year plan.

Then came the time to find experienced and competent resources to transform Phase I of Emmanuelle’s master plan into reality, plan which by now had been gladly approved by the landscaping committee. Finding such resources was easier said than done: the work being executed in part by volunteers and the grass reinforcement mesh parking lot, still little known in Quebec, discouraged more than one contractor.

The mandate was finally given to Nature Decor of Cowansville and Phase 1 took place in 2017 under the supervision of Emmanuelle. Collaboration was easy, says Emmanuelle who regularly visited the site. The team of two to four persons, depending on the tasks scheduled, worked earnestly and were friendly and conciliatory; this last quality was more than important since they had been asked to take into account the needs of the artists in residence. The only downside is that Phase 1 took longer than expected, summer making a tardy entrance and the discovery of some remaining foundations of the old house not helping the cause. 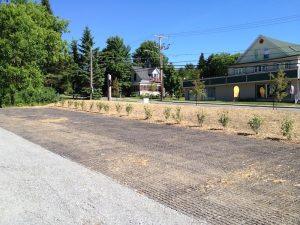 Transforming the parking lot: if you look closely you will see the reinforcement mesh.

Since the five-year plan has five phases, the first one ended with the arrival of winter. It was quite a year and we are truly proud of the difference we can already see around the barn and in the cultural park.

In the front of the property, we have managed to: