Here is Chapter 3 of The story of D’Arts et de rêves. Do you remember that last December you learned how this dream of an artists’ residence became a reality with, in addition, a cultural park that can be explored 365 days a year (Chapter 1)? Then in March, you read about the naming of D’Arts et de rêves (Chapter 2)…

At the beginning of this Summer, discover the many steps that led to Sutton’s International Symposium of Sculptures–Monumentum, August 7-16, 2015.

In April 2015, the organization D’Arts et de rêves officially exists and there is a property at 57, rue Principale Nord, in Sutton, that will become the artists’ residence and cultural park that Nicole Côté, Henri Lamoureux, and Joanie Leroux-Côté, the three co-founders, and board members had envisioned.

The Monumentum Symposium, of which Nicole is co-founder with Daniel Haché, sculptor, is scheduled for August 2015. Time is of the essence: it is necessary to transform the property, that is to give it life again, but how to go about it… Many steps will have to be taken and the following paragraphs give you an overview of the work accomplished. 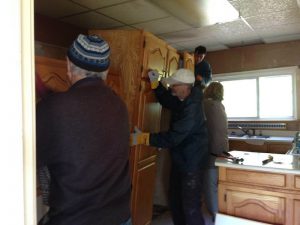 There is a house, a small garage, and a barn at 57, rue Principale Nord. The house has seen happier days, was abandoned for a while and is no longer what it was, difficult to recover. The garage will not stay the road. The barn is full of potential and this delights our three co-founders. All around these buildings, many perennials, even though they have been somewhat neglected, continue, year after year, to adorn the property. Nicole inventories the plants with Jean Lusignan who has lived in the house and knows the garden well. What abundance and variety! Nicole already sees how they could be transplanted and eventually used for landscaping. A truck full of earth is needed and Nicole finds the earth, then Donald Carey who graciously offers his delivery services. It is a great beginning and the wonderful thing is that equally generous gestures will appear throughout the many steps of this project. What has to be done inside the house? There are lighting fixtures, doors, hardware, fireplace stones, kitchen cabinets, a hot water tank, lots of scrap metal (later sold by a scrap dealer and some money was returned to the organization!)… Anything that has potential will be recovered.

At a press conference and via Facebook, Nicole and Henri appeal to all to volunteer for a working bee on May 23, 2015: good humor, goodwill, and good arms sought to save, outside the 57, rue Principale Nord, the many perennials and recover, inside the buildings, the objects that can be reused or recycled. Almost instantaneously, people support this project. Some donate spontaneously flower pots to transplant flowers and shrubs, while others call or write to propose their services. Still others offer to support the organization and appeal to their networks to spread the good news. Citizen involvement is incredible, all believe in the project and want to be part of it!

Small prerequisites for the May 23rd working bee:

This first working bee was a real success: not only was the weather great, but about forty persons enjoyed working in the flowerbeds… 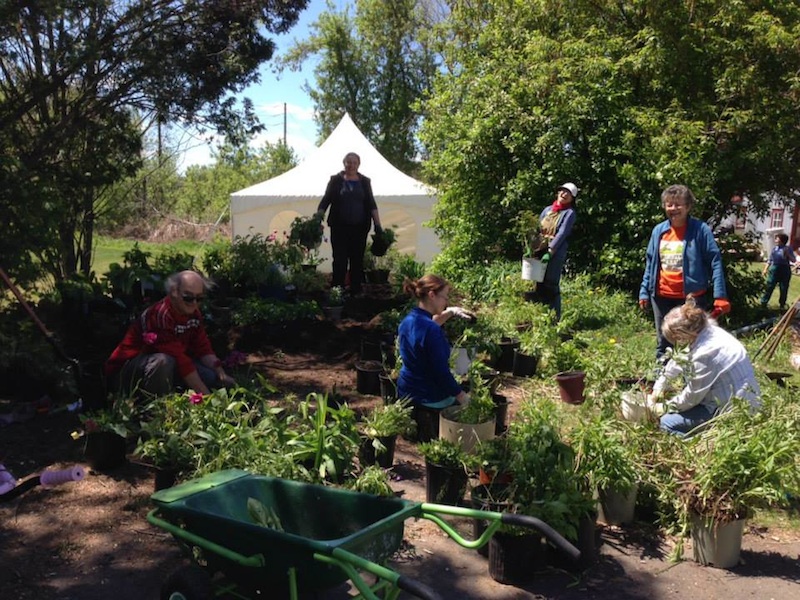 and buildings and then savoring the BBQ food prepared by none other than the chef Henri!

A pleasurable memory: some children accompanied their parents to the bee, they laughed and ran, while accomplishing small tasks. We felt that they were proud to help, it is as if the activity had taken on a family as well as a pedagogical turn… Then on Monday, June 1, 2015, under a gray sky, the house and the garage at 57, rue Principale Nord were demolished by REFCON, a partial gratuity through Gaétan Goyette. The three co-founders are more than pleased that the project is progressing rapidly, and it is thanks to the involvement of all the volunteers that the dream turns into reality.

Race against the clock for the Monumentum Symposium

We are now in June and Sutton’s International Symposium of Sculptures–Monumentum will be held in August. The site has to be set up to welcome the sculptors who will be working there for ten days (over two weekends).

Where should one start, there is really a lot of work to be done. Another appeal to all enables the volunteers to:

Adding to the Board

The Board of Directors manages all these chores: imagine the amount of work required… That is why the organization’s regulations (which will be endorsed at the next AGM) are amended to add two members to the Board: so in August 2015, Hélène Paré, historian, and Michèle Vigeoz, a retired healthcare network member, joined the three co-founders.

Then how does one obtain more funds to support the Symposium? The Després-Lusignan and Bourget-Côté families agree in advance to pay a sum of money to the Symposium in exchange for a sculpture that would be chosen by each family and then donated in their name to the D’Arts et de rêves park. It is quite a gesture on their part because who knows what the final outputs will look like: there are sketches, but the final versions are anyone’s guess?

Everything is ready in the park for the three sculptors participating in the second edition of this free cultural event: from Quebec, Jacques Bénard and Vasil Nikov, and from France, André Sandel. The artists distinguished themselves from over 95 applications from 25 countries, all of whom had to present a sketch based on the Nordicity theme. 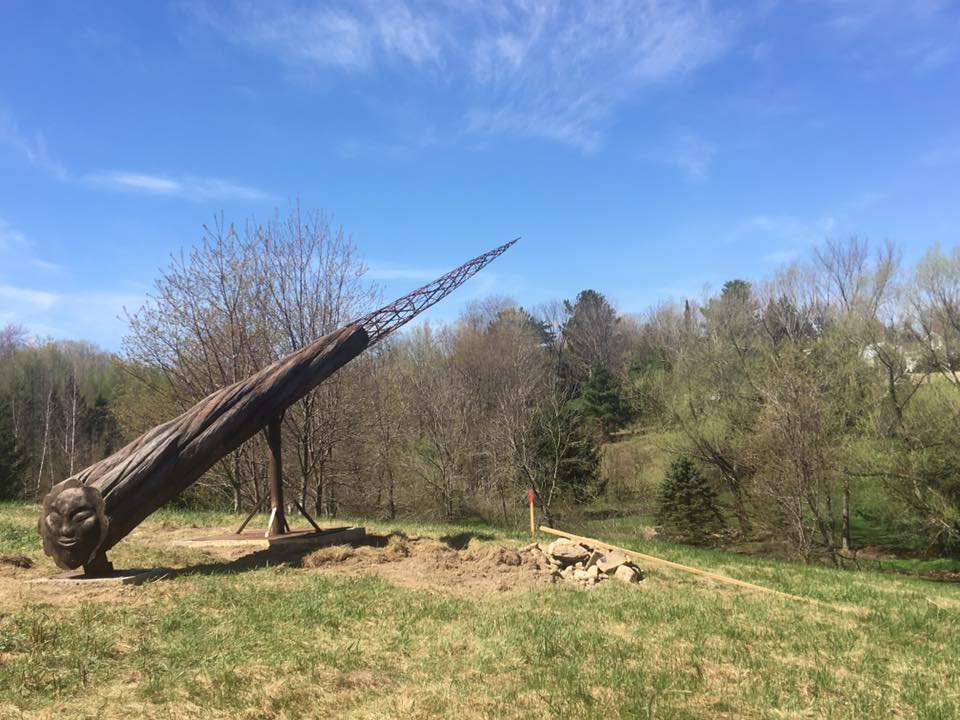 This site in the heart of the village enabled visitors to see the artists in action, every day from 9 a.m. to 5 p.m. and the curious ones abounded. An added value of this Symposium: people discovered the residence-workshop and cultural park project, and would gladly explore the trails. Other benefits were generated as well: a certain enthusiasm for D’Arts et de rêves, new volunteers, and spontaneous donations! “We dreamed a lot about this place. It took us a setting to create and an area to expose. We are living the dream. It is here in the park, that it is taking shape”, said Daniel Haché, president of the Sutton’s International Symposium of Sculptures–Monumentum (an organization disbanded in 2017). Two of the four artworks produced during the 2015 Symposium, in addition to the one created in 2014 in honour of the sculptor Robert Roussil, are now an integral part of the park’s setting. Needless to say that on August 16, 2015, on the day of the unveiling, members of the Després-Lusignan and Bourget-Côté families were present to discover and admire the works produced. The choice was difficult, nevertheless each family found its match and left happy to have its name associated with a sculpture that today enriches the cultural park.

In Chapter 4 of The Little Story of D’Arts et de rêves, you will have the opportunity to learn more about the growth of the organization.
To be continued…