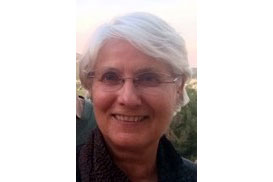 Today, get to know someone who has been volunteering since the beginning and who was elected one of the first members of the Board. The contribution of this volunteer is immeasurable because not only has she worked hard during the working bees, but she also created the artistic committee and helped to recruit a jury without whom the artists’ residence would not have artists…

We often talk about the theory of the six degrees of relationships, and in the case of Michèle and D’Arts et de rêves, this theory fits perfectly. Michèle knew Nicole (lawyer) and Henri (social activist) while working in an association of establishments in the health network where Nicole and Henri were involved as volunteers. In 2005, Michèle settled definitively in Sutton and, in 2007, she ended up on the Board of Arts Sutton where Nicole also sat. This is where Nicole shared with Michèle her vision of an artists’ residence. Michèle loved the energy and charisma of Nicole and was fascinated by Nicole and Henri’s passion for this project. Michele’s involvement in D’Arts et de rêves might have started there, who knows…

Who is Michèle? A Frenchwoman who landed in Quebec in 1972 (after a year of studies in the USA) to settle down with her family and to make a career for herself. Having already completed a master’s degree in psychology and social clinic, Michèle pursued her studies and obtained an MBA from UQAM. Michèle must have known that she would eventually work for D’Arts et de rêves because the fields in which she worked enabled her to develop and master the skills that would so well serve the organization today. Michèle recruited executives, headed CLSCs, held senior executive positions with the Association Québécoise d’Établissements de Santé et de Services Sociaux (AQESSS), provided support to a number of institutions, negotiated with various ministries… in short, a seasoned professional! And what did Michèle do for D’Arts et de rêves? To begin with, like many others, she participated in the May 23, 2015 working bee to recuperate the many perennials around the house. The project of the artists’ residence and the cultural park was progressing so quickly under the leadership of Nicole that the three co-founders thought of adding members to the Board and immediately invited Michèle to join them. What a wise decision!

Since then, much has happened.

Networking enabled Michèle to identify and recruit people who had links with our region and who represented each of the three artistic disciplines—circus arts: Jean-Jacques Pillet (Sutton); literary arts: France Mongeau (Dunham); visual arts: Suzanne Pressé (Sherbrooke). The artistic committee, formed at the end of 2015 with these three professionals, had its first working meeting with Karina and Michèle in January 2016.

One must admit that, since January 2016, the committee has not been idle and all get along well and enjoy cogitating together…

Under the guidance of Michèle, the members of the artistic committee have met about once a month and have:

With the bulk of the work now being done, the artistic committee meets every two months, as required.

The role of this committee is nonetheless ongoing as all its members are ambassadors, multiplier agents, disseminators of information… For the inauguration, they were the ones who made good use of their networks to identify and then invite people who made the day a memorable event.

If there is a call for submissions, there has to be a jury representative of the three disciplines to evaluate the applications. The criteria for recruiting the members of the jury having already been defined by the artistic committee, the ensuing task was to search for the best candidates, and once again the networks of the people involved in D’Arts et de rêves were explored.

The jury, as well as the artistic committee, is composed of people with links to our organization or our region, and its members commit to a two-year term.

And what does D’Arts et de rêves bring to a volunteer such as Michèle?

A lot!” says Michèle, including the pleasure of acquiring knowledge; meeting new people; sharing interests; being surrounded by people as enthusiastic and inspiring as the three co-founders and being able to support their efforts; working with members of the artistic committee, the jury members, and all the volunteers she meets during the various events and working bees. This organization is an added value for Sutton and Michèle is proud to be part of it.

What does Michèle wish for D’Arts et de rêves?

That the venue be known and appreciated not only by the artists in residence–all of whom have so far been charmed by the place, its tranquility and the atmosphere which encourage research and creation—but that it also be a source of pleasure for all those who dare venture within.

P.S.: Michèle, as you must have suspected, also has artistic talents. At the meeting which led to this article, Michèle showed me some jewelry that she created and I had the honour of visiting her workshop. Keep your eyes open, you will see Michèle present these little wonders this summer in Sutton…

Our fourth volunteer column will be published in the Fall of 2017 and will present the members of the artistic committee.