François spent his working career in Montreal and has recently retired. He discovered our region a few years ago when he met Nicole Côté and Henri Lamoureux. He then fell in love with the Ruiter Brook Creek, which led him to buy a charming rustic home in Mansonville. François is slowly getting used to living in this region and loves the many discoveries he is able to make, whether they be the different landscapes, the people, or the culture in all its forms.

It is with quite a bit of interest that François followed the making of the D’Arts et de rêves dream. And, retirement providing him with moments of leisure, François decided to get involved―for friendship as well as for pleasure’s sake―by offering his services to Nicole and Henri. What did François do, you may be wondering, well he did a bit of everything and enjoyed every minute of it. 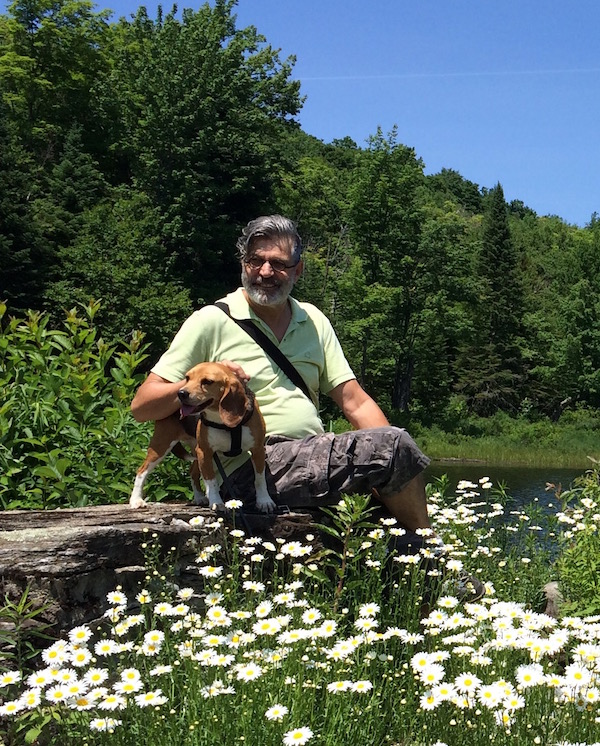 François enjoys a good laugh along with having fun, fortunately for him, because he more than had the opportunity this year. He laughs again when he tells the story of Henri Lamoureux and him building a culvert, not easy for amateurs to follow professional plans, but, with some pain and misery, our two happy go lucky men managed to respect the plans of the landscape architect and the culvert today strongly supports all the passers-by!

And what does D’Arts et de rêves contribute to a volunteer such as François? He would tell you that it is simply the satisfaction of working with passionate people who believe as strongly as he does in D’Arts et de rêves. Then there are the artistic discoveries: on November 12, François attended the presentation of Isabelle Renaud, the first artist in residence. Isabelle explained her journey as an artist, described her artist in residence project, and talked about the future of the artwork her stay in Sutton enabled her to create. Listening to an artist explain her work in such a passionate and structured way and knowing that one has contributed somewhat to the realization of this creative environment is a pure pleasure, says François.

What is François’ wish for D’Arts et de rêves? “I hope the project will run full speed ahead because it is really an added value for Sutton. I imagine a lot of sculptures in the park. I picture people walking in the park with their families and their friends. I imagine the inauguration of the amphitheatre projected in the five-year plan!”

Karina Sasseville, Coordinator of D’Arts et de rêves, sums up François Fournier as follows: “A smiling man, positive, available, generous, humble, who, upon completion of a task, does not hesitate to point out that he will again be available when the need arises.”

Our second volunteer column will be published in Spring 2017. Who will it feature?